Drop.io – a podcast with Chad Stoller

File Sharing is very binary – either you share a file online or you don’t.

Drop.io allows consumers to create their own private online spaces where they can easily and privately share photos, videos, documents, and other types of media with others. By default, drops are “private” – consumers control how and with whom drops are shared. Drop.io never requires any type of account registration, and all drops can be password-protected and set to expire after a period of time. Drop.io provides multiple methods of sharing content – by uploading through the Web site, sending email or MMS messages to the drop email address, faxing assets in and out, or by calling the drop voicemail number to leave a voice notes.

Hear what Chad Stoller has to say about how marketers’ should be using Drop.io externally as well as internally.

Drop.io – a podcast with Chad Stoller

Prior to joining drop.io, Stoller was Executive Director of Emerging Platforms at Organic, a marketing and communications company, where he led Organic’s strategy for new communication platforms, including social networking, mobile, gaming, meta-verse, geo-data applications and location-based services. In addition to developing strategies for Organic, Chad worked directly on emerging platform programs for leading brands like Chrysler Corporation, Bank of America, Fox Entertainment, NBC and Sprint.

Stoller began his career as a media planner and developer for fashion experience at Arnell Group, where he worked on such brands as Ray-Ban, Banana Republic, Donna Karen and Samsung. Subsequently, he co-founded Surge Interactive, the interactive division of Arnell Group, where he led interactive brand strategies for Universal Music Group, Tommy Hilfiger, Clear Channel, among others. Stoller returned to Arnell Group five years later in the newly created role of Director, Communications Solutions and was responsible for such brands as McDonalds, Siemens, Reebok, DaimlerChrysler and others. 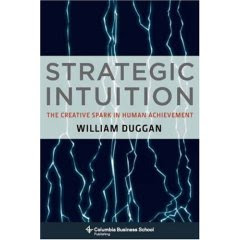 Have you ever had a flash of insight in the shower, when you’re brushing your teeth, or even just before you fall asleep? If you want to know more about this serendipity, then you should learn about “strategic intuition.”

The heart of strategic intuition mostly has to do with your mind combining existing ideas in new ways to solve a problem that you might be facing.

At a recent conference, I caught up with Columbia Business School professor William Duggan to talk about his new book, Strategic Intuition. The book recently received a very favorable review in The Wall Street Journal.

In this podcast, Professor Duggan offers advice to anybody who is trying to improve any process or trying to do anything creative. Check it out …

William Duggan is the author of three recent books on strategic intuition as the key to innovation: Napoleon’s Glance: The Secret of Strategy (2002); The Art of What Works: How Success Really Happens (2003); and Strategic Intuition: The Creative Spark in Human Achievement (forthcoming, 2007). He also has authored three previous books.

Innovation in a Web 2.0 world, a podcast with Professor Eric von Hippel

During a recent course I took at the MIT Sloan School of Management, I had a chance to meet Professor Eric von Hippel. Professor von Hippel, who leads the school’s Innovation and Entrepreneurship Group, had some interesting things to say about how the Web, particularly Web 2.0, will change the face of innovation.

The notion that I really liked the most was that users have always been the real developers of many of the new products that manufacturers produce. This is evident in the field of sports, for example the first skateboard. But now users are increasingly engaging in collaborative innovation – enabled by the Web. This collaborative user innovation has higher efficiency than traditional in-house product development by producers. As a result, some firms are abandoning aspects of their in-house development activities in favor of becoming publishers of innovations developed by user communities! Check out our podcast …

Innovation in a Web 2.0 world, a podcast with Professor Eric von Hippel

Eric von Hippel is a professor and head of the Innovation and Entrepreneurship Group at the MIT Sloan School of Management. He specializes in research related to the nature and economics of distributed and open innovation. He also develops and teaches about practical methods that firms can use to improve their product and service development processes.

How to Build a Successful Blog Quickly, a Podcast with Douglas Karr

I’ve been following The Marketing Technology Blog by Douglas Karr, and I’m in awe of him and his natural blogging ability. He blogs on his topic daily, sometimes more, and produces really well thought out posts. As a result, he has built a strong following on his blog that is rivaled by very few. And he’s done it in record time!

I decided to reach out to Douglas Karr and interview him on a podcast to bring you some key learnings on how to build the audience for your blog. Enjoy …

How to Build a Successful Blog Quickly, a Podcast with Douglas Karr

Doug is currently a product manager for a major permission-based email service provider – named one of the fastest growing private companies by Inc. magazine. Doug is also a proud member of the Indianapolis Colts Marketing Advisory Board, led by Pat Coyle, the Colts’ database marketing director. Pat and Doug also launched the Indianapolis Book Mashup – a book club to discuss the latest business, marketing and technology publications.