Amazon vs. Wal-Mart: How Online Strategy Can Meet In-Store Opportunity 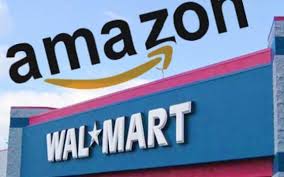 When Wal-Mart announced plans to use its retail locations to fulfill online orders last week, the media and business community broke into a collective game of word association. The word? Amazon.

Prior to breaking the news, Wal-Mart was already one of the few companies that could compete with Amazon online. But after unveiling how it plans to do so—by fulfilling online orders in its own stores—Wal-Mart became Amazon’s first serious threat.

The irony is that Wal-Mart will fulfill these orders using Amazon’s own in-store locker strategy. Wal-Mart has the significant advantage of already having 10,000 retail locations—something Amazon can’t currently compete with. For Amazon, staying competitive will either require rolling out a slew of its own physical locations (which is a possibility considering its test store concept last year) or establishing partnerships with 3rd-party brick-and-mortar retailers (something it is very much in the process of doing). In the meantime, however, all Wal-Mart has to do is boost its online game. Well, and install the lockers.

Clearly Amazon and Wal-Mart have different product sets. They also don’t overlap 100% in target customer bases, and there are a bunch of other things that are fundamentally different about their models… But for the sake of oversimplification, let’s say that all Wal-Mart has to do to rise to ecommerce supremacy is up the online ante. What exactly would that take? A lot. But Wal-Mart’s two most crucial priorities will be helping online customers navigate its extensive product list easily and quickly, and streamlining online and offline operations to create a turnkey overall experience.

Priority #1: Wal-Mart must transform itself into an invisible (and psychic) personal shopper to help customers navigate its vast inventory.

Like Amazon, Wal-Mart has a massive product offering. This isn’t a new problem for either of them, but as the race to fulfill orders guarantees quicker turnaround times and more convenience after placing the order, Wal-Mart must control every thing it can before the order is placed to ensure it’s actually placed through them. In this case, that means making sure customers can find what they’re looking for, quickly and easily. Or, in the case that customers don’t know exactly what that is, helping them figure it out with a fairly high degree of accuracy.

The good news is that this isn’t Wal-Mart’s first rodeo; they’re not exactly starting from scratch. They know who their customers are and they’ve got tons of data from past purchases and online behavior to inform their efforts.

They’ve also got enough content to appeal to every person in the US if they want to – it’s just a question of surfacing the right content to the right people. Therefore there is no extra work involved in getting more products or content; the challenge is simply using it better.

To act as an invisible personal shopper, Wal-Mart must master what they do with this powerful combination of content and data—and when they do it. The goal is to use it in real-time, as customers are browsing their online store.  This is different from standard product recommendations—things like “people who liked this, also like that”–which online shoppers have become accustomed to. Retailers now have the technology to go far beyond these persona/segment-based tools.

Priority #2: Create a streamlined and turnkey experience across all touch points between online and offline visits.

With this new model comes the potential for far more room for error than ever before. Online customers who will now be traveling to Wal-Mart’s physical locations to pick up their orders will no doubt expect a consistent experience from the moment they order all the way to fulfillment. Along the way, there are a number of touch points, including email, direct marketing, advertising, customer service, and so on.

Building on the idea of personalizing each individual’s online experience, Wal-Mart can easily improve each subsequent experience—something that may seem like it involves a significant level of complexity. But with the right infrastructure, it can be completely automated and dynamic.

The key to accomplishing this is putting visitor profiles at the heart of each cross channel experience. In other words, Wal-Mart can use the same model of targeting used online to inform which content each customer sees across all other channels. In the end, the digital channels match email marketing matches advertising matches direct mail matches messaging at the point of pick-up (a phrase I just coined, mind you), and so on.

At the end of the day, Wal-Mart’s rise to online dominance really just revolves around turning an otherwise complicated shopping experience into one that feels quaint and easy. It can accomplish this by setting up a strong behind-the-scenes infrastructure that puts the customer experience at the forefront. And isn’t that what their new strategy is all about—giving the customer what they want where they want it?

Can CMOs Master The Customer Experience For Hispanic Shoppers?